Times Article – Supporting our Steel Industry to Build Back Better 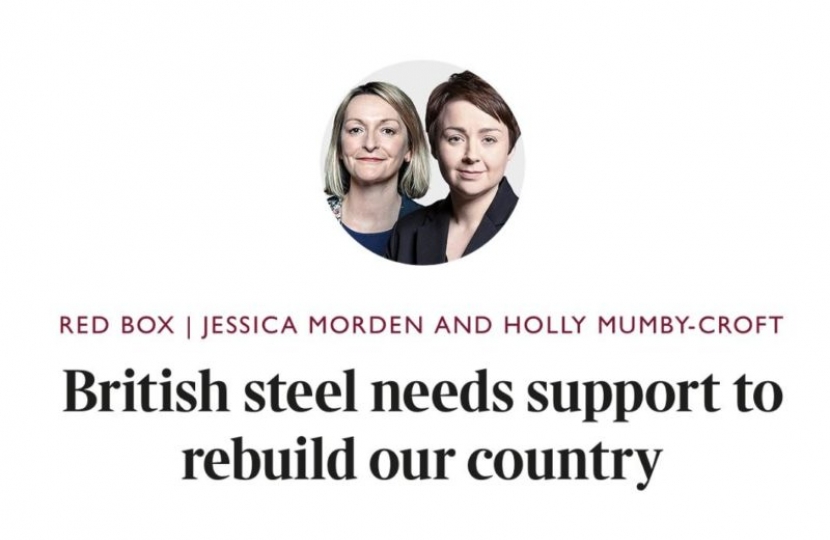 I have co-written an article in the Times Red Box with Steel Parliamentary Group co-chair Jessica Morden MP- lobbying the government to help us cut energy prices for steel as we compete internationally and move to low-carbon production. You can read it below or on the Times Website here.

For years, British steelmakers have played on an uneven field. In Closing the Gap, their report published yesterday, UK Steel argue that the electricity costs for domestic steelmakers far outweigh those of steelmakers outside Britain. This is the one of many disadvantages that we face when competing in the global marketplace. As co-chairs of the all-party parliamentary group on steel, we are calling on the government to recognise the impact this has on the UK as an industrial base and are asking them to take steps to address it. We must ensure UK steelmaking can continue and thrive in modern Britain.

Steel is not just an industry, it is an identity, and one that has existed across the generations. It is hard-coded into the communities we represent as MPs, into their values and their way of life. Steel towns are major manufacturing communities in the UK. They are a key part of our industrial future; we continue to consume increasing volumes of steel and we must do so in an environmentally sustainable manner, yet with the capabilities of international trade. This cannot happen within an uncompetitive environment. We are calling on the government to secure this through a regulatory framework that supports sustainable electricity prices for steelworks.

Steel production is an electricity-intensive process and for some companies, the cost of electricity outweighs the cost of labour. UK steelmakers pay 86 per cent more for their electricity than steelmakers in Germany, and 62 per cent more than those in France. Alongside lacking the same procurement and trading capabilities, the negative impact of the energy price difference is huge. Steel is a key, internationally traded product and in such a market there is simply no way to pass this discrepancy on to the consumer. It is simply an additional cost to bear, damaging competitiveness. The stark reality is that the additional cost of power in the UK is the equivalent of about a quarter of the total annual capital investment of the sector.

Crucially, the sector needs competitive electricity prices to transition to low-carbon production to help meet the Government’s target of net-zero carbon emissions by 2050. All options for decarbonising the steel industry require significantly higher electricity consumption. A theoretical switch to electric steelmaking would increase the power consumption of the sector by 300 per cent, and a switch to hydrogen-based steelmaking could increase it by as much as 800 per cent. It is clear that one of the barriers to switching some of our steelmaking to electric is higher power prices.

Ultimately, the UK cannot play its important role in addressing climate change and meeting net-zero targets without a strong and sustainable domestic steel sector. Steel is one of the most widely employed materials in everyday life. It is needed for wind turbines, energy-efficient housing, electric vehicles. More than 99 per cent of steel from scrap cars can be recycled and 96 per cent of steel from demolished buildings is either recycled or reused. A perennially uncompetitive steel industry will simply increase our reliance on imported steel, which may not be produced to the same environmental standards. This will be accompanied by millions of tonnes of transport-related emissions, as well as the tariffs and duties in place which will not be matched by exports.

We have spoken at length to steel companies about the measures required to tackle the issue and know that much has been done elsewhere in Europe. We need to match the commitment of other governments across Europe and act decisively to help steel communities represented by both Conservative and Labour MPs.

To take one example, if the UK were to follow a similar approach to Germany in the distribution of network costs and renewables levies, the electricity bills of UK steel producers would fall by 28 per cent a year. We have an opportunity together to unlock considerable sums of money for the steel sector to reinvest in the UK, bringing fiscal and environmental benefits and preserving jobs, communities and industry. Steel companies have already committed to increasing UK investment by 25 per cent should action be taken on this issue. The UK has a great opportunity to lead by example.

Steel is the foundation of our communities and we welcome the steps that the government has made to help the sector already, including significant support for both Celsa and British Steel. Co-ordinated action is needed now to ensure the future of the sector. British steel helped to build the world; in the aftermath of the pandemic, our world-class steelmakers stand ready to help rebuild Britain and this week’s report from UK Steel presents the pathway.

Response from Minister after campaigning for Omicron business support in December

Given the impact of the Omicron Variant on businesses, particularly the Hospitality and Leisure industries, during December, I wrote to the Department for Business, Energy and Industrial Strategy making the case for support.